Aurangabad District is one of the 36 districts of Maharashtra state in western India. It is bordered by the districts of Nashik to the west, Jalgaon to the north 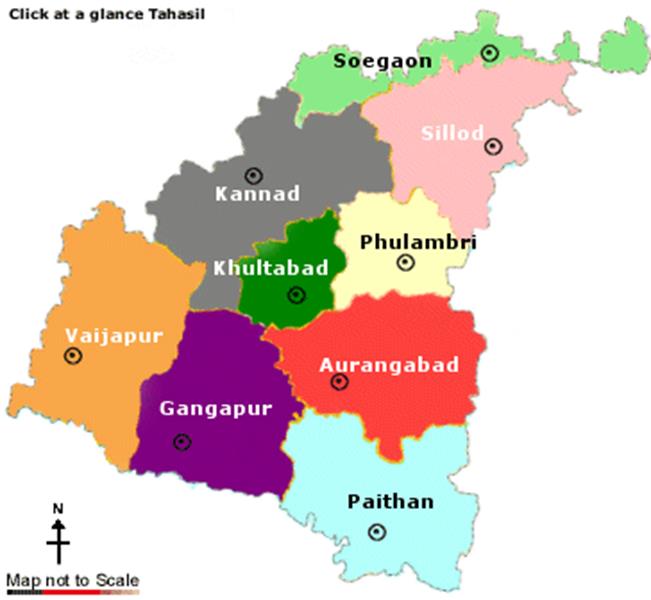 Jalna to the east and Ahmednagar to the south. Aurangabad is the headquarters and principal city. The district covers an area of 10,100 km², out of which 141.1 km² is urban area and 9,958.9 km² is rural. Aurangabad district is a major tourism region in Marathwada.
Historical Background
Aurangabad city is established by Mallik Amber the then Chief of Nizam’s regime for Ahmednagar, during 1610 A.D. Before that Aurangabad was termed as “Khadki”. For many years this city / province was ruled by Mogals which was followed by independent rule by Nizam of Deccan Hyderabad even after independence of country up to 1948 A.D. Due to long time rule by emperor Aurangjeb, most of the historical movements are still seen in undamaged and good conditions. Aurangabad is an important city in the tourist map of India and world especially due to its historical significance and world famous ancient paintings of Ajanta caves and sculpturous Marvel at Ellora caves situated at 100 km & 30 km away from Aurangabad city respectively. Moreover this city is regional head quarter of eight districts of Maharashtra State which is generally pronounced as “Marathwada Region” which previously was a part of Nizam’s provincial state of Hyderabad. Aurangabad city is linked with the network of Air Service, Broad-gauge Railways and Road routes which are situated at about 10, 7 and 5 kms from Krishi Vigyan Kendra campus respectively.
Geography
Aurangabad District is located mainly in the Godavari River Basin and partly in the Tapi River Basin. The district is located between 19 and 20 degrees north longitude and 74 and 76 degrees east latitude.
Climate
In Aurangabad district the rainy season runs from June to September. Winter is from approximately October to February and summer from March to May. The average rainfall of Aurangabad district is 734 mm, and the temperature range is about 5.6–46 °C .
Agriculture